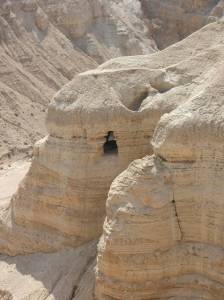 Yesterday (Labor Day), I went with a group from here to see the Dead Sea Scrolls exhibition at Southwestern Seminary in Fort Worth. Overall it was well worth the trip and the price of admission to see so many pieces of history. I’ll share a brief overview of the exhibition and then share some of my thoughts concerning what I saw.

The first exhibit contained artifacts from the Hasmonean Kingdom when Alexander the Great was out conquering. The second exhibit featured artifacts from around the time of King Herod in Jerusalem. Then we got to look at some ossuaries that were used to house the bones of the deceased. Exhibit four contained artifacts from Masada, where the Jews made a final stand against Rome (the temple had already been destroyed by this point). After this I believe we got the chance to look at some facisimilies of some fragments of the Dead Sea Scrolls.

After all these exhibits we watched a short video explaining the significance of the Dead Sea Scrolls and then got to look at the actual some fragments from the scrolls themselves as well as some early fragments from the New Testament and some old Christian Bibles from the Reformation (Luther’s Bible, 1611 King James, Erasmus’ Bible, among others).

Overall I definitely have a new appreciation for the Bible. Just seeing how skilled some of the writing was on the fragments, and how well it corresponds to the Bible we have today speaks volumes as to how laboriously and painstakingly these manuscripts were copied. Some people even dedicated their lives to copying these manuscripts.

I’d encourage anyone that has the chance to go see the Dead Sea Scrolls if you ever have the chance, regardless of what you believe.