When we last left off Peter and John had just performed a miracle in the Temple by making a man who had born lame able to walk. This attracted a crowd of people, presumably mostly Jewish, to which Peter delivered a second speech proclaiming to his fellow Jews that Jesus was the Messiah they had been waiting for, so they should repent of their lack of faith in Jesus as Messiah and join the community that He established “in order that times of refreshing may come from the presence of the Lord;” (Acts 3.19). We did not, however, learn of the reaction of the people to Peter’s speech; that is reserved for the following verses, the first part of which will be covered in this post.

As they were speaking to the people, the priests and the captain of the temple guard and the Sadducees came up to them, 2 being greatly disturbed because they were teaching the people and proclaiming in Jesus the resurrection from the dead. 3 And they laid hands on them and put them in jail until the next day, for it was already evening. 4 But many of those who had heard the message believed; and the number of the men came to be about five thousand. 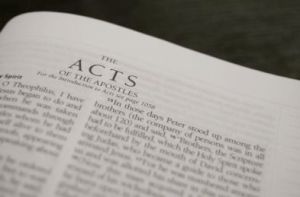 Following Peter’s Pentecost speech there is no mention of any opposition to his words, but here, for the first time in the narrative, opposition is encountered. The Sadducees were a sect of Jews who taught that there was no resurrection (Matthew 22.23; Mark 12.18), so naturally they would be disturbed if someone was proclaiming that someone rose from the dead. Not only did this challenge one of their defining teachings, but it also was a threat to their power as well since they were members of the Sanhedrin, the supreme court of ancient Israel to which all questions of the Jewish faith (e.g. the Law; Law of Moses) were finally put; one of their defining teachings being proven false threatens their credibility to accurately interpret and decide on matters of the Jewish faith.

So in order to keep their credibility and power they have Peter and John put in jail. However Peter’s words had already had an effect on the people since “the number of the men came to be about five thousand.” The word translated “men” here is the Greek term andron, which usually refers to men or husbands; so the number of male Christian believers is now at about 5,000, and the total number of believers presumably higher with women and children added in. Often the Jews, when discussed in relation to Biblical events, get a bad rep, however a significant number of them did come to recognize Jesus as the Messiah and the early Christian community was primarily composed of Jewish converts. Let’s not forget that.

5 On the next day, their rulers and elders and scribes were gathered together in Jerusalem; 6 and Annas the high priest was there, and Caiaphas and John and Alexander, and all who were of high-priestly descent. 7 When they had placed them in the center, they began to inquire, “By what power, or in what name, have you done this?” 8 Then Peter, filled with the Holy Spirit, said to them, “Rulers and elders of the people, 9 if we are on trial today for a benefit done to a sick man, as to how this man has been made well, 10 let it be known to all of you and to all the people of Israel, that by the name of Jesus Christ the Nazarene, whom you crucified, whom God raised from the dead—by this name this man stands here before you in good health. 11 He is the stone which was rejected by you, the builders, but which became the chief corner stone. 12 And there is salvation in no one else; for there is no other name under heaven that has been given among men by which we must be saved.”

Annas and Caiaphas are mentioned previously in Scripture as presiding over Jesus’ trial before the Sanhedrin (specifically mentioned in Matthew 26.57-68 and John 18.12-28), so they are no strangers to opposing Jesus and His followers; in fact they were part of the group that persuaded Pilate to have Jesus crucified. Peter is certainly aware of who these men are and what their feelings are towards Jesus and His followers, but that doesn’t dissuade him from continuing to proclaim what he has consistently proclaimed: that Jesus Christ was crucified, dead, buried, and rose again and there is salvation in no one else; He is the Messiah that we have been expecting and His kingdom has been established.

Thus far in the narrative Peter has given three speeches and each speech has been delivered to the same audience: Jews, and had a consistent message: Jesus the Nazarene is the prophesied Messiah you have been waiting for, so repent of your lack of faith in Him and join the community He established. Even when faced with a group that he knew to be hostile towards his message he still did not change it, but proclaimed it faithfully. His faithfulness was not due to him being logically convinced of a theological system of beliefs, but rather because he had witnessed the events he was proclaiming and could not deny his experience.

I have mentioned previously that Christianity is based on the historical event of Jesus’ death, burial, and resurrection, not on any particular system of theology; the theology can fall away and be proven false, but as long as Jesus rose from the dead Christianity is true. I say this is the basis because this is what the Apostles themselves claimed as the basis of the faith, and we have seen Peter state that basis three times now in the Acts of the Apostles.

As Christians the basis of our faith should be this basis as well; Jesus has risen and defeated death and through Him we have eternal life and salvation. In the Christian culture I was raised in I found this basis unfortunately neglected and not proclaimed to the extent I believed that it should have been. To me it seemed that more effort was devoted to defending particular doctrinal or theological beliefs (though this certainly does have a place), and not enough to proclaiming and reminding me of Jesus’ resurrection and the implications of that event.