Rublev’s icon of the Trinity depicts the three visitors to Abraham in Genesis 18. See here for more information about the icon: http://www.holy-transfiguration.org/library_en/lord_trinity_rublev.html

Last year I officially converted to Anglicanism from an ‘Evangelical’ background. This post is the first in a series describing my journey.

One thing that has stood out to me over the course of my seminary studies has been the differences in thought between the early Church Fathers and modern theologians. In modern Evangelical seminary education theology is taught systematically, which means that the whole of Christian theology is divided into separate sub-parts and each topic is discussed individually and independently of the others (usually these parts end in –ology). From the standpoint of an educational methodology this systematization is useful because it makes it easy to discuss the various aspects of the faith without confounding the issue. However I believe that shaping and training the thinking of future ministers by using such a systematic methodology is dangerous because life is not systematized, but interwoven. It is impossible to break life down into various independent sub-parts that never interact with the other parts because each part of life interacts with and influences the other parts.

My faith, as a consequence of this systematic educational methodology had been systematized as well. All the various parts of theology, The Trinity, Salvation, the Church, Man [that is, humanity], Sin, etc had all become separated from one another. As a consequence of this I found it theoretically possible to change doctrine in one area without that change affecting any of the other areas. If I had continued this thought process its ultimate end would likely have been the renunciation of my faith, or at least a redefinition so radical that it would bear no resemblance to traditional orthodox Christianity.

In contrast to this the NT authors and early Church Fathers did not divide their theology into separate categories; everything is interwoven with everything else. This difference gradually became apparent to me during my explorations of Anglicanism as I began to notice that their theologians were not describing things in quite the same manner as the Evangelical theologians I was used to reading. By the time I finished a course on the theology of the early Church where we had the opportunity to read some of the primary source documents from that period the difference in thought between ancient theologians and their modern Evangelical counterparts was definite.

Most recently the consequences of this systematic thinking have become apparent to me regarding the Trinity. My Evangelical upbringing provided me with very little understanding of this doctrine. Sure it was in the doctrinal statement of the churches I grew up in, and believed by the leadership of those churches, but it was rarely mentioned during the services and I failed to see it as a foundational element of the Faith. The foundation of my faith during this time was Scripture and the teachings of Scripture. Unfortunately the Trinity is not explicitly taught in Scripture, but rather is derived from it, thus I did not regard it as foundational to my faith, but rather a consequence of it.

So when I began attending some Anglican services I was surprised that the Trinity was constantly and consistently mentioned during the services. In fact ‘God’ was rarely, if ever, mentioned apart from ‘Father, Son, and Holy Spirit.’ This difference was striking to me, and I began to ask myself the question, ‘Why is the Trinity mentioned so often?’ After nearly two years I realized that the answer to this question was that the Trinity was foundational to the theology of Anglicanism, a foundation which was not to be found in my theology.

This foundational difference is, I believe, important to realize because Christianity is not based on Scripture, but on the redeeming work of the Trinity. It was the Father who created the world through the co-eternal Son. After we rebelled in the Garden and were driven from the presence of God it was the Son who left the Father in heaven and took on our sinful flesh and reconciled us back to the Father in heaven through his death, burial, resurrection, and ascension. After His ascension the Son sent the Spirit from the Father to indwell all who believe. It is this redeeming work of the Trinity, which bridged the chasm created between heaven and earth at the Fall, on which Christianity is based; without this work Christianity is invalid. 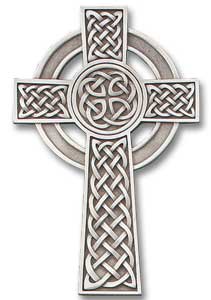 The Celtic cross. The knots on the cross represent the interweaving of heaven and earth.

This last part, how we should live, can be found within His body, the Church, which will be the subject of the next post  in this series.